I find it funny that us quilters refer to the much larger general population of people who don’t quilt as “non-quilters.”

Although there are 16 million quilters in the United States alone, we are still greatly outnumbered 19 to one. Is there a better term for a non-quilter that’s more reflective of the situation? Pre-quilter? Anti-quilter? Antea quilter?

I now think of my entire existence in terms of B.Q. and A.Q. – “before quilting” and “after quilting” much like the calendar era uses B.C. and A.D. It’s like I’ve chosen quilting to be the dividing point of my own personal history.

‘Getting into quilting’ is like going down a rabbit hole. Once you’re in, there is absolutely no going back. On the upside – it’s a rabbit hole filled with beautiful fabric, a warm community of people, and hours upon hours of blissful ignorance of everything else happening around you.

By nature I am not a relaxed person. It’s very difficult for me to sit still without doing something. Sewing provides me an inner peace and focus I never thought I could attain. I can sew and watch TV, sew and listen to talk radio, or just simply sew.

To my friends and family, I know you’re probably growing tired of me extolling the joys of sewing/quilting and I sound like I’ve joined some type of quilting cult. But I’m telling you, learning to sew is like nothing else you will ever do.

Yes, I am drinking the quilting flavored Kool-Aid.

You learn a valuable life skill. You get to express an immense amount of creativity. It gives you joy, a sense of accomplishment and productivity.

At least once a day, I wonder why the heck I didn’t start quilting earlier! I feel like I missed out on so much because I just didn’t know.

Some things you will discover when you enter the sewing realm:

Fabric you’ve seen at craft stores is only the tip of the iceberg. You have NO idea. NO IDEA. There is so much else out there and available that isn’t carried at those stores. To get a glimpse into it – check out Fabric.com. Of course, how would you know? Unless you step foot into a quilt shop or deliberately log onto an online fabric store – you wouldn’t.

Singer is far from the only brand of sewing machine. (You know, like the entry level models you’ve seen on sale at Walmart in the craft aisle) There’s also Bernina, Baby Lock, Janome, Juki, Brother, Husqvarna Viking, and Elna. And the price range is incredible – anywhere from $50 – $12,000+. Serious quilters drop serious cash on a high quality piece of equipment. 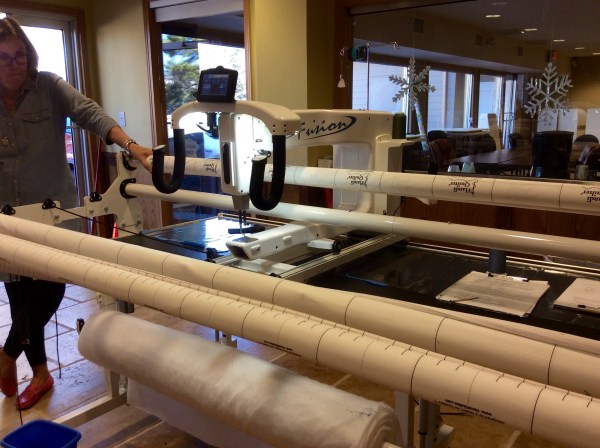 Ever heard of a longarm quilting machine? They are $10,000-$30,000 gadgetry that switch up the concept of quilting by loading the back, batting, and top onto a metal frame. The machine head is attached to a chassis that rolls both horizontally and vertically – allowing it to quilt while the fabric stays stationary. Different versions run either by hand or by a computer that can quilt programmed designs automatically.

Many of these sewlebrities converge on an annual basis each February at something called QuiltCon. I have yet to go to QuiltCon, but it is on my bucket list. It looks like a blast – it’s a who’s who of the quilting world with workshops, lectures, and tons of vendors. Definitely the equivalent of Comic-Con for the quilty set, and EQUALLY as geeky.

Spending endless amounts of time perusing Pinterest, Instagram, and blogs for inspiration photos of sewing and quilting projects will eat up much larger chunks of time than you ever thought could be possible.

Your fabric stash will start off small. Some remnants from Jo-Ann’s at first. Then a few fat quarter bundles you ordered during a Black Friday sale. And maybe some yardage you’d been coveting for a while that’s on clearance in the 50 percent off section of your local quilt shop. All of a sudden, you’ve got enough fabric to open up your own store.

If you’re doing anything but sewing, you’ll just be thinking about when the next opportunity you’ll have to get some good time in at your machine is and what you need to do next for that skirt-in-progress. At times, your thoughts will be consumed by visions of quilt blocks you’ve been meaning to try but haven’t gotten around to yet.

All roads lead back to sewing.

It will be 4 a.m. and you’re sitting at the computer writing about your addiction to quilting, while watching a 2013 QuiltCon lecture series available on Craftsy.

See you next time!

3 Responses to "Late night confessions from a hardcore quilter"